Skip to content
JGL / The Synagogue / History of Synagogue

Since the year 1300 Jewish people have lived in Lucerne during the different periods and the different authorities in the Canton and the Region. The Ortodox Jewish Community of Lucerne was founded and obtained its status at the beginning of 1800. Local Jews of Lucerne and its neighbouring area united into the official Community in 1870. In 1892 JGL numbered quite not many Jewish families, who administrated together the only Community with the members of different backgrounds. They conducted Shiurim and religious services on every Shabbat and every Holiday, kept and maintained the Synagogue, Mikveh, Mohel, a Jewish school and a Jewish kindergarten, local Chazzan and the choir, full-time wage Rabbi, interest-free loans, Tzdaka and support for poor people and refugees, the old and the new cemeteries, Chevra Kadisha, women society, kosher butcher’s shop, basic products cooperative store and bakery, covering all the needs of the everyday Community life.
With the course of time, and through the two World Wars, JCL increased with the Jewish families who moved to Switzerland from other European countries, and Holocaust survivors who managed to escape to Switzerland and the city of Lucerne.

The beautiful old Synagogue which is the only one in Lucerne was built in March (5 Adar) 1912, for the most part due to the donation of Mr.Josef Croner from Karlsruhe, a traveller, who visited Lucerne at the beginning of the century as a guest of one of the Community members. Mr.Croner was so much fascinated with the place and the Community that, witnessing how small and modest its synagogue was, decided to bequeath a considerable sum for the foundation of a splendid synagogue.

The Synagogue of Lucerne is indeed one of the most beautiful and outstanding in Switzerland and Europe. It was constructed by a German architect Max Seckbach (1866-1922) who projected Friedberger synagogue in Frankfurt, that to our regret, was ruined alongside with over hundred other synagogues during the Crystal night and after that – Holocaust. Today it is the only synagogue in the world that escaped destruction and preserved this peculiar architectural style of the synagogues from the previous century.

In this old Synagogue there are over 200 seats for men and women that serve more than 100 years to the Community which numbered as the highest 150 families by the establishment of the state of Israel in 1948. After the State was founded many young Jews migrated to Israel and some others moved to more numerous communities of Zurich, Basel and other big communities in Europe and that it why JCL became smaller each year.
Today JGL numbering about 40 families as its members runs and preserves the Synagogue holding minyan for every Shacharit, Mincha and Arvit on every week-day, Shabbat and Feast, with the help and support of the students of the Yeshiva Lucerne. And that’s why it is the only synagogue in Lucerne where everyday worship is carried out in a way it is prescribed. The Synagogue implements all the religious and community services for every Jew and all the Community members in Lucerne
In the Synagogue there is kosher mikveh: comfortable mikveh for women, mikveh for men and separate mikveh for dishes. For more details please click Mikveh
There is no local Rabbi at the moment in the Community, but questions and decisions on Halachic issues, mikveh sanctity, kashrut, Chevra Kadisha and others are subject to Rabbi Chaim Moshe Levy, Rabbi of the Community Eshurun in Zurich.
For more details on JGL and its services please click. 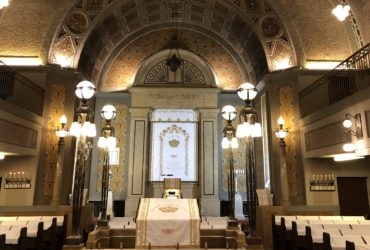 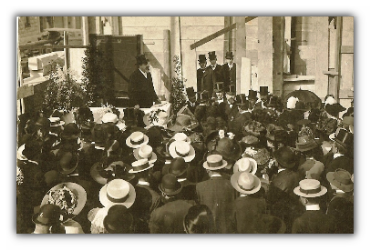 1911 – laying of the foundation-stone of the Synagogue